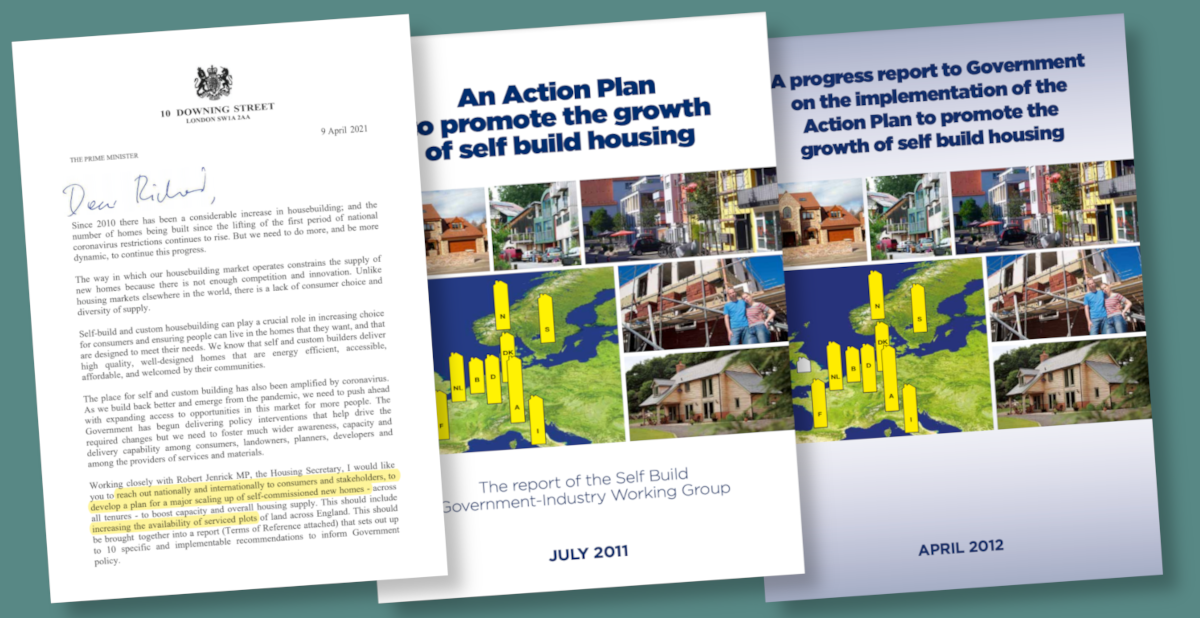 The submission on 23 July of Richard Bacon’s Review of the Custom and Self Build Sector marks 10 years since the publication of NaCSBA’s paper An Action Plan to Promote the Growth of Self Build Housing (see below for more).

This set out a vision for taking self build mainstream, to double the number of homes provided by the route, while opening up self build to a new generation of younger self builders. This paper predated the coining of the term custom build, and set out a vision that would ultimately lead to the Right to Build legislation in 2016.

A special thank you to NaCSBA’s longest standing members

While NaCSBA’s roots go as far back as 2008, it is these last 10 years that have seen the transformation of both NaCSBA and the entire custom and self build sector. The submission of the Bacon Review marks the close of one chapter and the opening of a new one where we hope to achieve that target of doubling output.

But as a member organisation, NaCSBA is reliant on those people and companies that have had the vision and commitment to support our work through membership. So while NaCSBA thanks all of its members, we’d like to extend a very warm thank you to all those companies that have been with us since the start, or very nearly, especially those members that have supported us for 10 years or more.

A decade on and the sector is poised for greatness – government is listening, there is more finance available than ever before – both for development and consumers, and the planning sector is starting to appreciate the difference we can bring to housing. So we intend to build on these foundations and continue to work to grow the sector.

Thank you for 10 years of support…

The An Action Plan to promote the growth of self build housing put forward the following proposals:

“The report proposes for industry to work with Government to undertake a wide ranging self build development communications campaign to proactively engage with lenders, land owners, housebuilders, suppliers, contractors, planners, housing officers and local council members. This campaign will aim to promote the growth of the self build sector by demystifying the self build housing model, highlighting opportunities to attract new entrants and promoting more collaborative and innovative delivery models like those now seen in Continental Europe and many other countries.”

In the 10 years NaCSBA promoted and attended many such education events to promote the route and practice, but a large scale consumer campaign remained beyond its budget. However, educational trips abroad, and its wider presentations have helped shape practice, and directly led to new innovations and approaches, most notably Graven Hill, following a Cherwell DC councillor attending one of our European showcase trips.

“Industry will prepare and publicise a series of up to date self build housing best practice notes and case studies through an action learning network to encourage further innovation in the sector. This information will describe innovative financial solutions, procurement models and projects that the UK self build sector could learn from and, where desirable, communicate how planning tools and local protocols could be used most effectively to facilitate different types of self build housing applications.”

To follow through on this ambition NaCSBA set up the now independent Right to Build Task Force. This started life with a series of expos across England and Scotland to promote the route, creating a dedicated website, The Right to Build Toolkit, to share and capture emerging best practice. This model eventually refined itself to focus largely on planning, receiving funding from the Ministry of Housing, Communities and Local Government to provide free training to every local authority in England around their duties, as set out by the Right to Build legislation.

Provide independent information to would- be self builders

“To provide clearer independent information to would-be self builders the self build industry will launch and maintain an internet based self build ‘portal’.”

This was met with the launch of the Self Build Portal, which continues to be a source of free, impartial advice without any advertising. It is also home to the Right to Build Portal where consumers can find and sign up to their local self build registers.

“Industry will look to provide better information to would-be self builders about the malpractices that exist in the marketing of self build plots which have no realistic chance of gaining planning permission and what measures are available to report and take timely action against such practices.”

NaCSBA worked to promote understanding of these practices, to help remove them, both with the public and government.

“Industry and Government forms an implementation group to take forward the actions identified and to report on progress with this work by the end of March 2012.”

This was followed up on, with A progress report to Government on the implementation of the Action Plan to promote the growth of self build housing