MP Richard Bacon together with NaCSBA’s Michael Holmes and Ted Stevens have successfully led a study trip to The Netherlands on behalf of the All Party Parliamentary Group on Custom and Self Build. The delegation comprised councillors from throughout the UK, including Glasgow, Oxford, Nottingham and Teignbridge – all hoping to learn how Dutch development models can be transferred to similar projects in the UK.

Delegates were shown many successful schemes in Amsterdam, Nieuw Leyden, Almere and The Hague by the various development teams responsible for self and custom build in the vicinities. In addition to reviewing successfully completed self build projects, the delegation was introduced to a number of group housing projects and self refurb schemes that have become highly popular in The Netherlands, which make use of otherwise redundant buildings.

Nieuw Leyden was the first stop on the trip. Here, around 700 homes have been built on a redundant central site in the heart of a busy town, Leiden. The project was delivered by a successful partnership between the city council and a housing association. The new homes were built quickly and generated a good return for the partnership.

The Dutch city of Den Haag (‘The Hague’) has a very active enabling team that has delivered hundreds of homes in the past four years by supporting private homebuilders. Kepplerstraat is self refurbishment scheme that has seen a redundant school building transformed into a number of sizeable apartments.

A peek inside one of the apartments in Kepplerstraat, where the owner was finishing the shell of his apartment on a DIY basis. 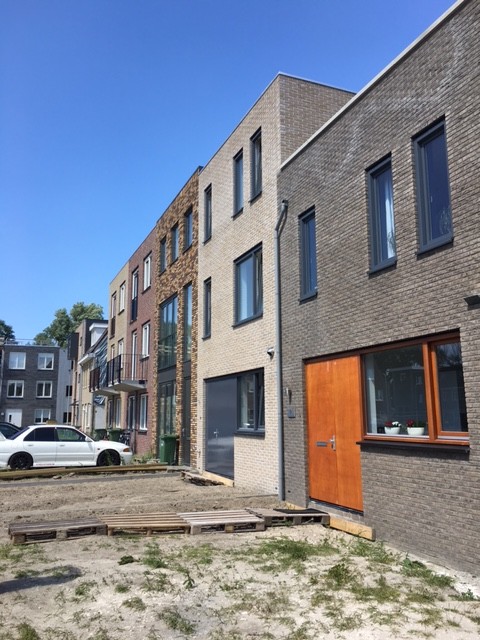 ABOVE: Escamplaan, The Hague, is a small neighbourhood development of affordable homes. The neighbourhood is still under construction, although many properties have been finished. Here a mixture of styles gives the street-scene an eclectic finish, showing that diversity and difference can create an attractive and welcoming setting. 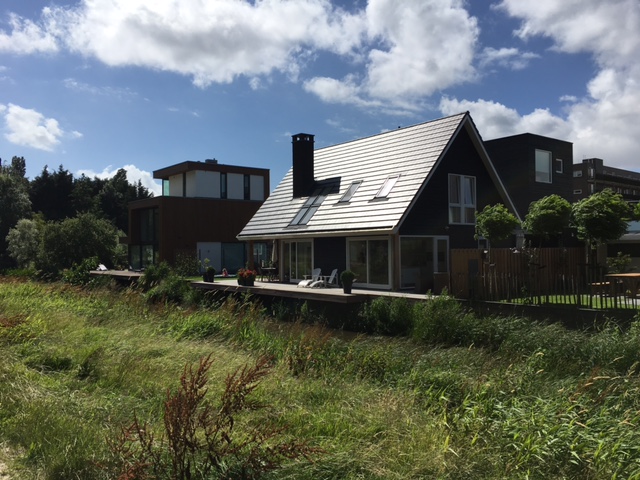 ABOVE: Gele Lis is a cluster of detached properties in The Hague. The area has a rural feel, and the properties on site have been inspired by modern, high-quality farmhouses. The location was originally intended for a caravan site, but as these plans were never implemented the development team was able to create a series of self builds. Some of the development rules include: the facades of homes must be built from at least 50% wood, up to 50% of the plot can be built upon, two plots can be joined together to build one large home or four smaller homes. 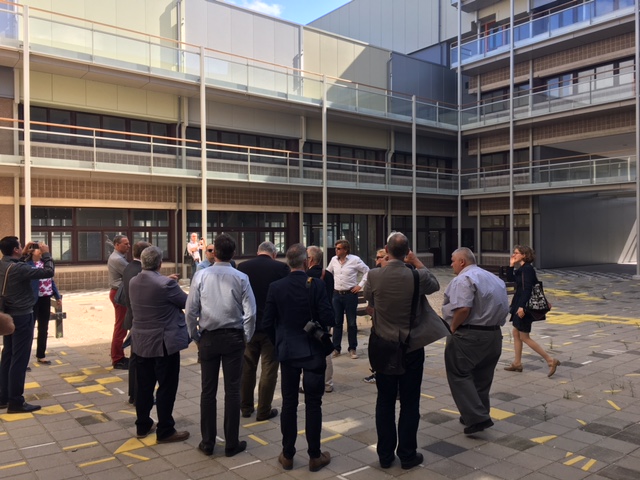 ABOVE: Junoblok is a renovation scheme that will see the transformation and redevelopment of an empty office building. The building will accommodate 67 apartments, work spaces or a combination thereof. The development team will work on a new entrance, the stairwells and refurbishing the roof and public space. The buyers will renovated their apartment/work space to suit their needs, subject to a few time and layout constraints. 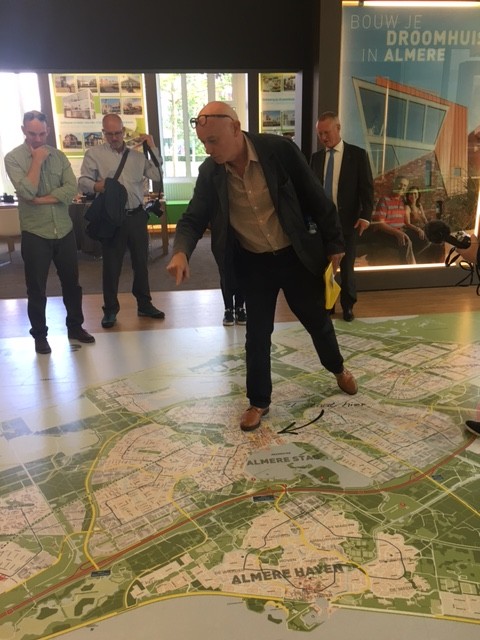 ABOVE: Almere is the largest self build ‘city’ in The Netherlands, and has a huge mixture of house types, sizes and styles. The Plot Shop in Almere is the largest of its kind – a team of salespeople work from the Plot Shop to discuss the various purchase and build options available in the various districts – from small affordable homes to luxurious detached dwellings. 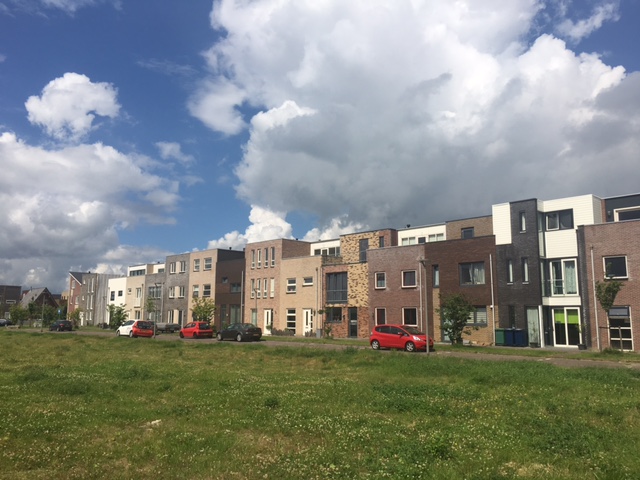 ABOVE: A street of terrace properties in the Homeruskwartier district of Almere. There is a mixture of house types, styles and sizes -individual plots vary in size from 86m2 to more than 1,200m2. 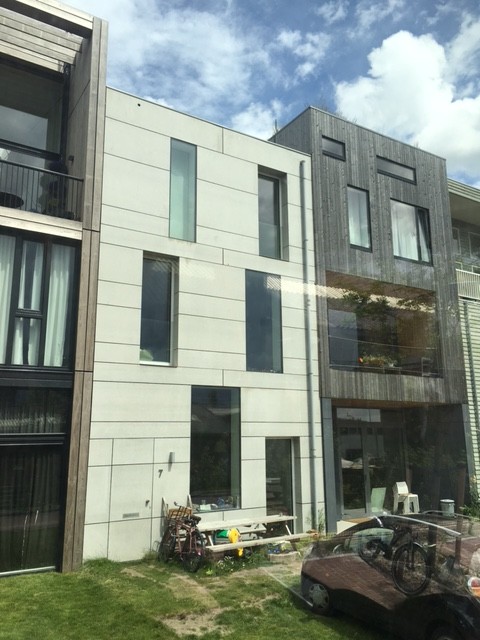 ABOVE: The city of Amsterdam has its own development team – Team Zelfbouw – that is working on a range of initiatives including group builds, mixed use scheme and co-housing projects. In the coming years, 3,500 homes and 200,000m² of workspace will be built in the former industrial area of Buiksloterham, situated in the north of Amsterdam. The first phase has been delivered – the street-scene above shows a range of live/work units. 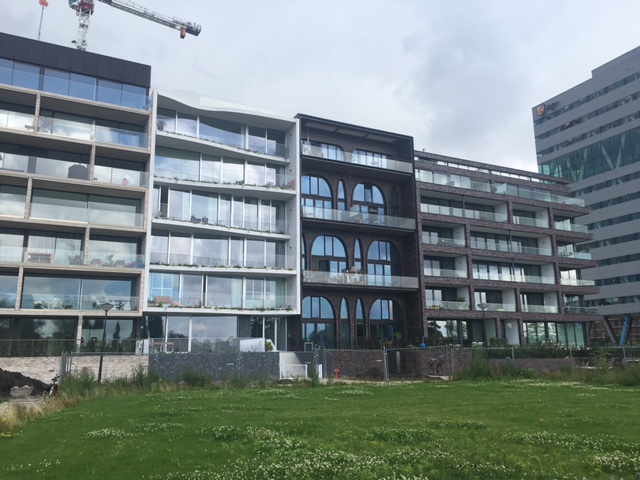 ABOVE: Amsterdam’s Markonstraat development contains a number of group self build projects. NaCSBA visited the 3rd property from the left, which contains seven large apartments, all with a starting price of E300,000. The complex was built by contractors to shell stage, at which point the owners could choose to finish their apartment on a DIY basis or by hiring another contractor. The basement and roof terrace areas are shared by all inhabitants.